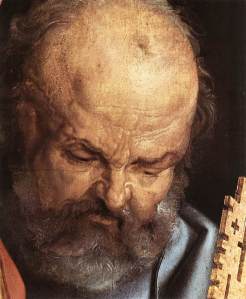 Jesus comes and takes the bread and gives it to them, and the same with the fish. This is now the third time Jesus showed himself to his disciples after being raised from the dead.

He says to him the third time, “Simon, son of John, do you love me?” Peter was saddened because  he said to him the third time, “Do you love me?” and he said to him, “Lord, you know everything; you know that I love you!” Jesus says to him, “Feed my sheep. Amen, amen I tell you, when you were younger you used to put on your clothes and walk at will; but when you grow old, you will hold out your hands and someone else will clothe you and carry you off to where you do not want to go.”

(He said this to show by what sort of death he was to honour God) And after saying this he says to him, “Follow me.”

Turning round, Peter saw following them the disciple whom Jesus loved, the one who had also leaned on his bosom at supper and said, “Lord, who is going to hand you over?” So when Peter saw him, he says to Jesus, “Lord, what about this man?” Jesus says to him, “If I want him to stay until I come, what business is it of yours? You are to follow me!”

So the word went out among the brothers and sisters that this disciple would not die; but Jesus did not tell him he was not to die, but “If I want him to stay until I come, what business is it of yours?”

This is the disciple who is giving evidence about these events, and has put them in writing, and we know that his evidence is true. And there are also many other things done by Jesus. If all of them are to be written down I guess the world itself will not contain the books that will be written.

Perhaps I may be forgiven for referring to my analysis of present tense indicators of dialogue (says…answers etc.) in chapters 4, 11 and 20, by which I suggested that the use of the tense was linked to teasing conversations between Jesus and women, where the status of Jesus as Divine Bridegroom of Israel is hinted. In the dialogue of the risen Jesus with Mary Magdalene we see the fulfilment of this “banter” in the revelation of Jesus as the longed for Bridegroom on the way to the father. Here in this passage the historic present is used as the appropriate tense for the actions and words of the Risen Lord, and especially for his “banter of love” with Simon Peter.

Bread and fish are recorded as the substance of the Feeding of the 5000 (John 6:9) which also is set at the lakeside of Tiberias and which also has Jesus “taking and giving” to the crowd. Jesus is called the bread of life; through him the produce of earth ( bread) and sea(fish) become signs of the nourishing presence of the Lord.

In this case of course the nourishment also means freeing Simon Peter to nourish others which he can only do when he has been faced with his own failure and need of nourishment. Jesus’ three questions remind Simon Peter of his three denials of Jesus, and also of the way in which he has often been tempted to put his desired status as chief disciple before the task of feeding others. When Jesus asks him if he loves him more than these others, he is reminding Peter of his unjustified conviction that he did have more love than his fellow disciples. Gently but very firmly Jesus tells Simon to forget about his status, indeed to forget about himself and to shepherd the community of Jesus; and lest he interpret this authority wrongly the last command is to “feed them”, to feed not to dominate.

This has always been a critical passage for me, inasmuch as like Peter, I’ve always been tempted as a minister to think of my status vis a vis other ministers, to look to projects and activities that display my leadership; and I have had to learn, as Peter did, through obvious failures of faith and courage, to get on with the task of feeding Jesus’ sheep, that is of providing nourishment for the women, men and children of the church community, a task whose demands and rewards keep me as humble as I’m ever likely to be.

Jesus’ prophecy about Peter indicates martyrdom in some form, maybe the crucifixion which church tradition asserts. The words are poetic, contrasting the robust freedom of the young Peter with the lonely weakness of his fate. Jesus’ command to follow includes the command to be his witness even in the face of violence. 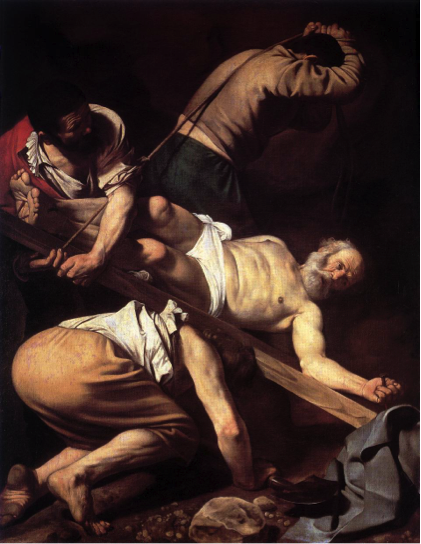 crucifixion of Peter by Caravaggio

As always in stories about Peter, the great man offends again as soon as he has proclaimed his love of Jesus, in this case by asking a jealous question about the other disciple. As in other cases where he blunders, he is swiftly called to account by Jesus, who again tells him to follow not to jump into the lead.

The words about the beloved disciple are part of the growing legend which eventually depicts the Apostle John as a very old man in Ephesus. Here they are interpreted in a way which acknowledges the death of the disciple who is claimed as the source of Gospel. We have no historical evidence of the truth or otherwise of this claim or of the identity of the disciple whom Jesus loved.

I like the last verse because it depicts the gospel writer, glad to be at end of his task, recognising that he is only part of a growing literature about Jesus, which however will never measure up to the life it tries to record.