CAMBODIA TAKES  BATCH OF REFUGEES FROM AUSTRALIA FOR £500m 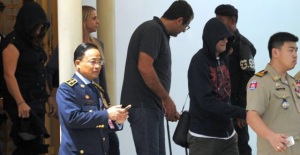 15 Don’t you know that your bodies are parts of the Messiah? So, am I to take parts of the Messiah and make them parts of a prostitute? Heaven forbid! 16 Don’t you know that a man who joins himself to a prostitute becomes physically one with her? For the Tanakh says, “The two will become one flesh”;[a] 17 but the person who is joined to the Lord is one spirit. 18 Run from sexual immorality! Every other sin a person commits is outside the body, but the fornicator sins against his own body. 19 Or don’t you know that your body is a temple for the Holy Spiriit  who lives inside you, whom you received from God? The fact is, you don’t belong to yourselves; 20 for you were bought at a price. So use your bodies to glorify God.

Paul is taking up what he understands to be the opposition’s arguments:

a) If according to Paul the old Jewish law is not binding on believers, everything is permitted. This may have meant a complete divorce between religious faith and morality.

b) Religion is a matter of the mind and spirit. Bodily behaviour is not relevant to salvation. The body has its own mechanisms of hunger and sexual desire, which may be simply satisfied without moral interference.

If Paul is accurate in his representation of his opponents’ thinking, he was obviously facing an intellectual rebellion which was able to use the central conviction of his own teaching – you are not under Law but under the kindness of God – to support a very different kind of faith.

1. Even if all behaviours are permitted, they are not all helpful, that is, good for me or others. This is a perfectly proper reply. There may be no overarching moral imperative but sensible people try to avoid harm to themselves and others.

2. Even if all behaviours are permitted we may recognise that some are addictive and may gain power over our capacity to choose. Today we routinely think of alcohol abuse in this way, but Paul may have been thinking of how self – indulgence can hold sway over our wills. Again this is a modest but important reply, pointing towards what is prudent.

3. He faces the claim that the body is irrelevant to salvation with several forms of rebuttal:

a) His opponents see the body as mortal and insignificant – well then, why allow its desires to rule you?

b) it is not true that the body is irrelevant to salvation. Jesus Messiah has offered his whole self including his body for our salvation and our proper response is to offer our whole selves, including our bodies to him.

c) United to Messiah Jesus our bodies are destined for resurrection like his, and are already through faith joined to his body. How can we be united to Jesus Messiah and at the same time united with a prostitute?

d) illicit sex may seem to harm nobody, but it damages one’s own body, which is, in Paul’s belief, the new ark of the covenant or the new Jerusalem Temple, that is, the place of God’s presence. Using the body carelessly is like a desecration of the Holy Place.

e) Finally it is simply not true that we are free agents with responsibility to nobody. We are the recipients of God’s love expressed in the life and death by execution of Jesus Messiah. We are bought with a price and belong to God.

These are all relevant arguments for Paul to make. They may not convince his opponents but they clarify the differences between his faith and theirs. If we share the faith of Paul, we should take these arguments seriously.

For some time most Christian  Churches have been caught out by the sexual revolutions of the 20th century, during which successive improvements in contraception made unwanted pregnancy less likely, while a growing awareness of the importance of sexual pleasure for both men and women  challenged puritan restrictions. The overwhelming power of capitalism to turn sex into a commodity has been hugely influential as has the gradual loosening of family ties. The recognition of and the according of equality to a variety of sexual orientations, in Europe and America but not in Africa, Asia and the Middle East, has further undermined traditional Christian views on sexuality.

All of this has so scared the churches into either liberal vagueness or fundamentalist certainty that it has failed to offer coherent and relevant wisdom to its own members, or to  the communities in which they live. If churches cannot offer wisdom on this topic, how can they view their gospel as relevant?

I’ll take time tomorrow to tackle this issue. Join me then for sex and much much more!

Tags: churches and the sexual revolution, Paul on sex