UK DOING NOTHING FOR REFUGEES COMPARED WITH JORDAN

Psalm 9 Sing Praises to the Lord

with all my heart
and tell about the wonders
you have worked.
2 God Most High, I will rejoice;
I will celebrate and sing
because of you.

3 When my enemies face you,
they run away and stumble
and are destroyed.
4 You take your seat as judge,
and your fair decisions prove
that I was in the right.
5 You warn the nations
and destroy evil people;
you wipe out their names
forever and ever.
6 Our enemies are destroyed
completely for all time.
Their cities are torn down,
and they will never
be remembered again.

7 You rule forever, Lord,
and you are on your throne,
ready for judgment.
8 You judge the world fairly
and treat all nations
with justice.
9 The poor can run to you
because you are a fortress
in times of trouble.
10 Everyone who honors your name
can trust you,
because you are faithful
to all who depend on you.

11 You rule from Zion
and we sing about you
to let the nations know
everything you have done.
12 You did not forget
to punish the guilty
or listen to the cries
of those in need.

My enemies mistreat me.
Keep me from the gates
that lead to death,
14 and I will sing about you
at the gate to Zion.
I will be happy there
because you rescued me.

15 Our Lord, the nations fell
into their own pits,
and their feet were caught
in their own traps.
16 You showed what you are like,
and you made certain
that justice is done,
but evil people are trapped
by their own evil deeds.
17 The wicked will go down
to the world of the dead
to be with those nations
that forgot about you.

18 The poor and the homeless
will not always be forgotten
and without hope.

19 Take action, Lord!
Do not let the nations triumph.
Make them stand trial
in your court of law.
20 Make the nations afraid
and let them all discover

that they are merely human. 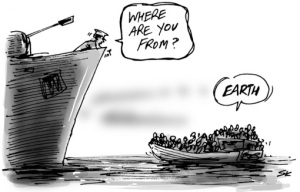 I’ve given this psalm in the Contemporary English Version (CEV) to show a different way of translating Hebrew poetry. Almost all English versions retain some of the style of the KJV (1611). The CEV rejects that style altogether and adopts the rhythms and vocabulary of contemporary English. The reader will see that where the meaning of the original is strong it remains strong in this version, but where it is weak, its weakness is not disguised by impressive rhythms. The CEV is by no means a complete success but it challenges the piety and theology of some more highly regarded versions.

This psalm is almost certainly half of a single psalm that included Psalm 10. These were originally one alphabetical composition with each verse starting with successive letters of the Hebrew alphabet, although the text as we have it lacks verses for a few letters. Alphabetical poetry was common enough in the ancient middle east, where after all, the alphabet was invented. It appealed to the game-playing virtuoso of words, and communicated to the reader a sense of completeness. It also means that in the search for words starting with the right letter the psalmist sometimes fails to keep the flow of his argument.

Verses 1-12 speak of confidence in God. The speaker of the psalm is a poor person, that is, an ordinary, Torah-keeping Jew, who values God’s law more than wealth or position. Her enemies are named as foreign “nations” but perhaps they are also fellow Jews who do not keep God’s Law. It would be easy to see the speaker as an ideal Israel, faithful to God but buffeted by more powerful nations. Probably both meanings, the personal and the national, should be kept in mind. The reader will see that the speaker believes her enemies have been totally defeated, wiped out, for ever. This doesn’t quite square with the continued plea for God’s help in the verses that follow, but perhaps we are meant to see this first section as the result of the appeals made in the second.

There is a certain satisfaction, not to say glee, shown by the speaker at the fate of the “nations”. Whether we think of godless individuals or whole nations, Christians are likely to feel the lack of any “evangelical” attitude to those condemned by God. That’s to mistake Israel’s view of its own partnership with God. She has to keep God’s Law in the hope that she will be a blessing to all nations as an example of what life under God means, in the hope that they too will ultimately turn to Israel’s God. Israel is not asked to evangelise but to live her difficult life as the chosen people of God. Similarly the “righteous poor” within Israel, saw themselves as the true people of God, keeping Torah for the sake of other Jews who did not. This faith sometimes is expressed in ways that offend Christian sensibilities, but it is an important example of faith which refuses to badger unbelievers but simply tries to live by its own standards.

Of course the unbelievers, that is, not atheists or adherents of other Gods, but simply those who take no notice of God’s Law, these unbelievers badger the faithful believers, by their cruel and lawless behaviour. In such a world the person who has neither wealth nor power turns to God as their main resource. Over and over again, beyond all the injustices of the powerful, the faithful person envisages God’s own tribunal which will  establish her innocence and the guilt of her enemies. This desire for public declaration of God’s justice is at the heart of the “psalms of complaint.” It is a desire shared by countless generations of powerless people who have been pushed around by powerful nations and groups who care nothing for their rights.

The second section sums up this plea to God, “Keep me from the gates that lead to death and I will sing about you at the gate to Zion.”  The person whose life has been saved from the enemy gives thanks to God in the temple, the place where God’s name is honoured and the great festivals bind her and all Israel in partnership with God. The gift of life and safety is not to be taken for granted but rather celebrated in communal worship. Rich and powerful people can take these things for granted; for them, injustice and suffering are unusual events, but the “poor of the land” (Hebrew: ‘Am ha ‘aretz) experience them as frequent companions. This is a contemporary truth also. 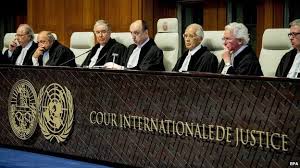 God’s justice is seen by the speaker in the fact that evil people are frequently brought down by the consequences of  their own malice; evil brings its own punishment. Of course, sometimes that is true, but sometimes the evildoers seem to survive in luxury while their victims starve. The speaker says the evildoers go down to the world of the dead with the rest of God’s enemies, but according to Jewish faith, so do the faithful people. So what hope have the poor and homeless? The speaker returns to the hope of God’s tribunal at which the powerful will be shown their utter weakness and the decent faithful people will be rewarded. Where and when is this tribunal? The speaker gives no clue, but her trust in its existence is evident.