NO PROPER APOLOGY YET FOR BOMBING  MSF  HOSPITAL

10 Why are you far away, Lord?
Why do you hide yourself
when I am in trouble?
2 Proud and brutal people
hunt down the poor.
But let them get caught
by their own evil plans!
3 The wicked brag about
their deepest desires.
Those greedy people hate
and curse you, Lord.
4 The wicked are too proud
to turn to you
or even think about you.
5 They are always successful,
though they cannot understand
your teachings,
and they keep sneering
at their enemies.
6 In their hearts they say,
“Nothing can hurt us!
We’ll always be happy
and free from trouble.”
7 They curse and tell lies,
and all they talk about
is how to be cruel
or how to do wrong.
8 They hide outside villages,
waiting to strike and murder
some innocent victim.
9 They are hungry lions
hiding in the bushes,
hoping to catch
some helpless passerby.
They trap the poor in nets
and drag them away.
10 They crouch down and wait
to grab a victim.
11 They say, “God can’t see!
He wears a blindfold ”
12 Take action, Lord God,
and use your powerful arm
to help those in need.
13 The wicked do not respect you.
In their hearts they say,
“God won’t punish us!”
14 But you see the trouble
and the distress,
and you will take action.
The poor can count on you,
and so can orphans.
15 Now break the arms
of all merciless people.
Punish them for doing wrong
and make them stop.
16 Our Lord, you will always rule,
but nations will vanish
from the earth.
17 You listen to the longings
of those who suffer.
You offer them hope,
and you pay attention
to their cries for help.
18 You defend orphans
and everyone else in need,
so that no one on earth
can terrify others again.

Once again I’ve used the Contemporary English Version, as it gets right away from the influence of the KJV, revealing the very direct language of the Psalms. This psalm is a continuation of psalm 9 and its plan of starting each new verse with successive letters of the Hebrew alphabet.

It also continues the theme of God’s reaction to human evil.

The very first line is a memorable question which we find in many of the Hebrew prophets and wisdom literature such as Job and Ecclesiastes. The keywords  are “far off” and “hide yourself”. The Jewish people had faith in a God of goodness who had given them his guide to goodness in the Torah, so that they could be his special partners in extending his blessing to all peoples. From the Torah however, they also knew that their God had a special regard for the poor, the widow and the orphan. Perhaps this special concern for the likely victims of human cruelty should have raised a question in their minds: why would a God of goodness permit this cruelty in the first place?

In any case the question arose when Israel was oppressed by foreign powers, or the faithful Jews by unfaithful ones, as to the apparent absence or at any rate hiddenness of God. Was there any point in a God of goodness who failed to confront human evil? It seems a legitimate question.

This psalm puts the question boldly by giving a lengthy description of the deceit, violence and contempt for God shown by evil doers in Israel. The psalmist is at pains to remind God that God’s own interest is at stake as well as the interests of faithful people, including the poor and the orphan. The evildoers think that God is wilfully blind to their actions and that they will not be punished.

The psalmist calls on God to take action, to “break their arms” that is, to render them harmless, and to punish them for their wrongdoing. Even this heartfelt plea for God’s justice gives the game away. If God has to be badgered to exercise justice in earth, what sort of God is that? 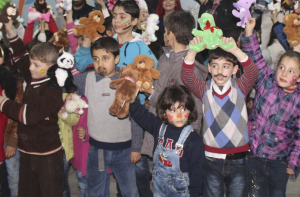 Still, the psalmist expresses a stubborn faith in a God of justice, in whom the poor and the oppressed can place their hope. Although the psalmist cannot see how God’s justice will work on earth, just the thought of it lifts up his head and gives hope.

Christian believers are able to push the question of God’s justice into a realm beyond death and time, in which the sheep will be rewarded and the goats punished. If that faith is to be more than  evasion, they have to take seriously the psalmist’s conviction that the goodness of God must be seen in the land of the living. God will be utterly disgraced if it is not. And if God refuses to do this directly then it is the responsibility of God’ servants on earth to  rescue his reputation by doing justice in God’s name, knowing that God himself has become a victim in his son, Jesus Messiah.